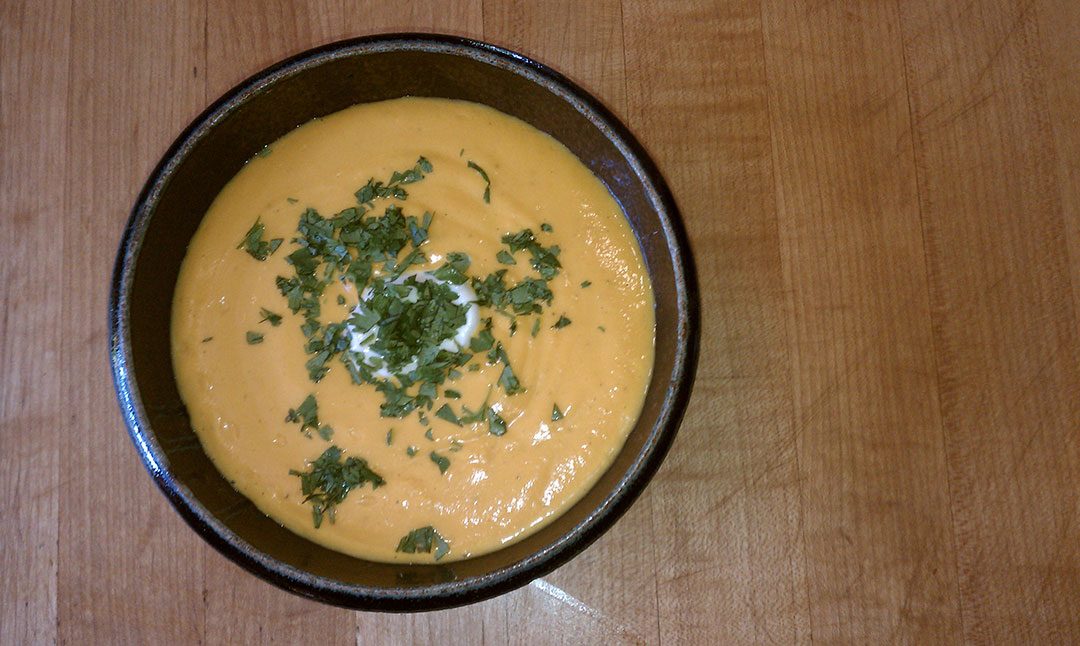 It’s been a nice hot summer here in Portland. This means that eating soup with homemade broth regularly hasn’t been very appealing. On the GAPS Diet and in other traditional ways of eating, homemade broth is consumed daily as a source of healing and protection for the digestive tract. Plus it tastes delicious and feels great in your belly!

I’ve been on the hunt for chilled soup recipes that include broth and came across an entire website dedicated to cool soups! While Great Cold Soups isn’t a GAPS-specific recipe site, these chilled soups are based on real foods so they are pretty easy to modify. I’ve made two of them so far, and this is my take on the Curried Carrot Soup, substituting a couple ingredients to make it GAPS-friendly.

I was pleased to see that the fat in my homemade chicken broth stayed mixed in to the soup evenly once it was blended. I also love this flavor combination. It’s different than what I have in my usual rotation of foods and with the fat present in the chicken broth, plus the yogurt, it filled me up without feeling like too heavy of a meal for summer.

The other soup I’ve tried from Great Cold Soups is the Chilled Mango Soup. Being a fruit-based soup, this one doesn’t contain any broth, but is more like a gourmet smoothie. The only substitution I made is using full-fat yogurt instead of low or non-fat. Absolutely delicious and refreshing on a hot evening!

Know someone who’s suffering in the heat and can use a savory cool treat? Share this recipe with them!

Can you use the GAPS Diet™ for SIBO?

Constipation Remedies for the GAPS Diet

Can I do the GAPS Diet while I’m pregnant?