Hunter’s Story:
Recovering from Autism with the GAPS™ Diet 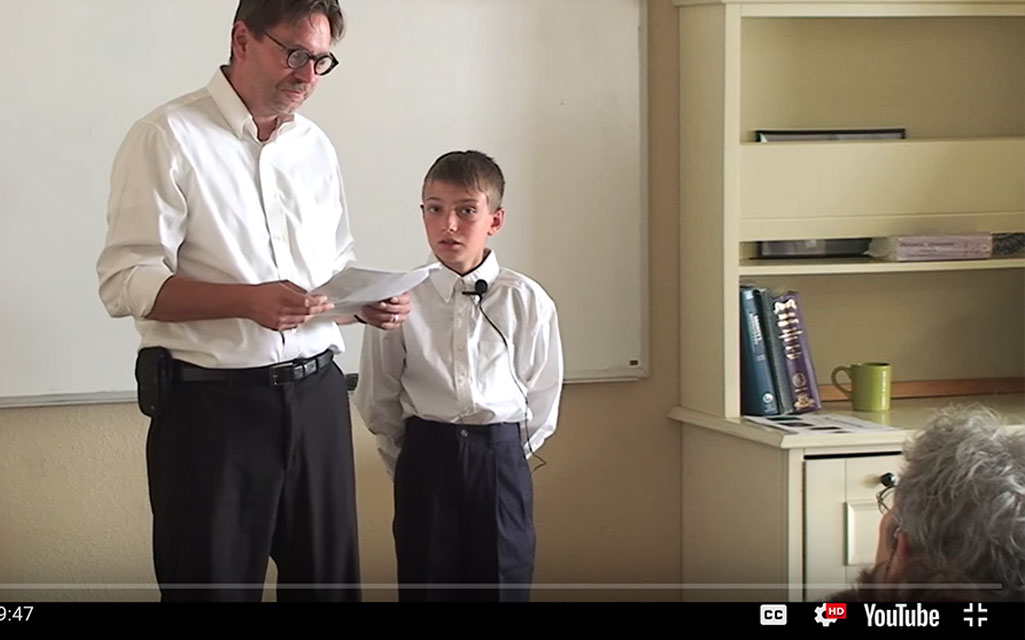 Hunter was diagnosed with Autism Spectrum Disorder at 7 years old.

He began the GAPS™ Diet at 8 years old.

Now at 10 1/2, this boy explains in his own words what he was experiencing and feeling during the years he couldn’t communicate in the typical way.

Watch the video (20 minutes) or read on for some of the highlights.

Three years ago Hunter Salch wasn’t able to speak to even one person, much less the GAPS Support Group where he shared these experiences. In the video Hunter and his father tell the story of his health and how his symptoms progressed. After 1 year on the GAPS Diet Hunter explains that the things he thought were normal for him just stopped. Around that time he started telling his mom about what he had felt during those years and they began keeping a journal of his memories.

Hunter was raised like most kids, getting the typical vaccinations, eating junk foods, and being given a wide variety of conventional medicines when he was ill. His family didn’t connect the dots between his symptoms until he was 7 years old. That’s when they realized that he was on the Autism Spectrum.

From very early in life Hunter had hour-long angry outbursts and hysterical crying over simple things.

At age 2 he developed asthma and was given an inhaler. Around the same time he couldn’t get to sleep, often lying awake until the middle of the night. He was especially fearful of loud noises. He cried and cried at a fireworks show. When he got older he’d just run away from loud noises he anticipated. He now explains that they “hurt” him.

When he was 5-6 he would only play alone, lying on his back with his arms and legs in the air.

He couldn’t tolerate any changes, like his parent’s new car or a new place at the dinner table. He had a ribbon tied to “his” chair and couldn’t sit anywhere else.

When he was 6 years old he experienced vision issues. Everything would go black for 15-30 minutes. This happened every day for a few weeks. His Dr. suggested he might be experiencing low blood sugar. At school he would “blank out” and not be able to hear or talk. He could only stare straight ahead for 5-15 minutes at a time.

When his parents bought a washing machine with a clear front he would watch the entire wash cycle. He liked the pictures the colors created. He’d ask for another load after the first was done.

The “shaking” began when he was 7 years old. He explains that his brain wanted him to stop everything so he could just shake. By the time he was 8 the shaking was stronger, lasted about 30 seconds, and happened almost constantly. His parents thought it was seizures and his Dr. diagnosed them as severe tics. The medications that were recommended had such terrible side effects that his parents decided against them and began to look for other ways to help him.

This is when they found the GAPS Diet.

After about 1 year on the diet, Hunter started telling his mom the stories behind his odd behaviors all those years.  He recalled that when he was 2 years old the house would “tilt” around him when he was in bed at night. This wasn’t scary.  When he was 3 he began seeing tiny live sparkles at night and he would play fun games with them. When he was 4-5 he started seeing black shadows at night in the shape of people. Even if he blinked the shadows remained and this scared him. He kept his eyes closed in fear.

At 5 years old he kept his hands at his chest in a certain position. He felt like he had no choice but to do this if he wasn’t using his hands for something already.

Kids with autism are notoriously picky eaters and Hunter was no exception. He had a hard time with any new food. When he learned that chickens ate bugs he was convinced that eggs had bugs in them and he wouldn’t eat them for a whole year. Sliced ham reminded him of the skin on someone’s face. He saw pigs eating grass and was convinced that bacon would taste like grass. He refused to eat these things and couldn’t tell his parents why at the time.

Behavior issues, asthma, sleeplessness, being in their own world, communication issues, obsessions, picky eating, and tics are all common symptoms in what we now know as a “GAPS child,” but these symptoms can be corrected. Every body is capable of healing when the right supports are there. Addressing the symptoms individually didn’t provide the correct support for Hunter. Through the GAPS Diet he was able to correct nutritional deficiencies, heal his gut-brain connection, and allow toxins that had accumulated in his brain and body to leave. Now he’s capable of living a fuller, independent life.

The GAPS Diet isn’t easy at first, but neither is dealing with the ongoing health and behavior issues that Hunter was experiencing. If you know someone with a child on the autism spectrum, please share this story with them to let them know that there is both hope and a path for them to follow in helping their child heal.

Change Your Mind about Picky Eating

Essential oils do not treat or cure disease

How long will it take for my kid to stop being a picky eater?